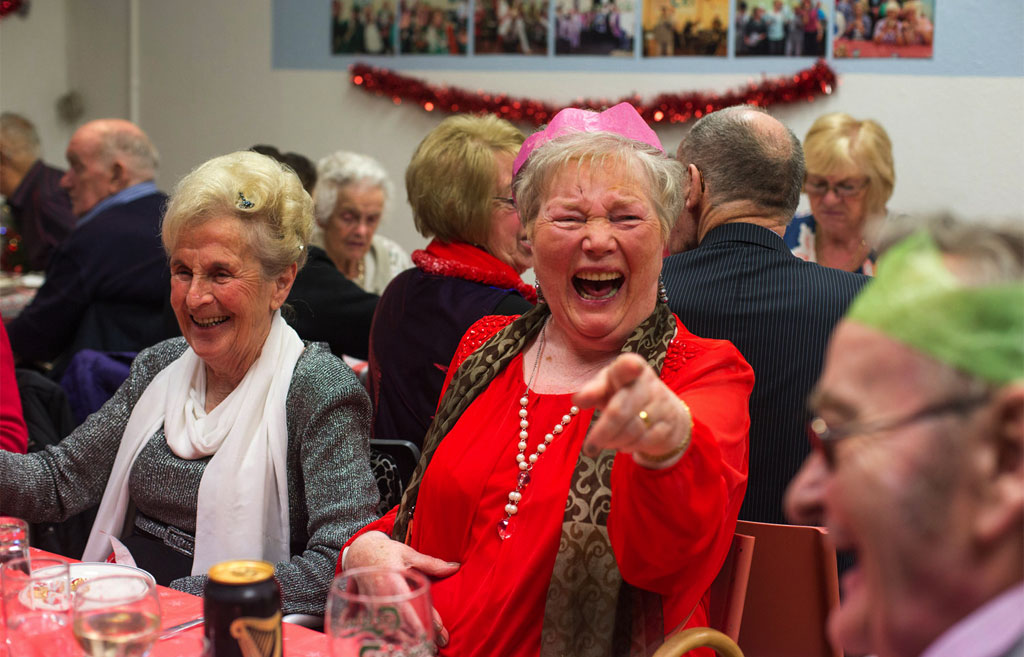 ‘Boyband’ may not have been an entirely accurate description – given the average age of the four-piece was around 82.

“That’ll be on file in Garda patrol next week,” he joked before launching into a rendition of ‘Jingle Bell Rock’.

The Bolton Street Band – Ireland’s oldest group – provided the entertainment at the Friends of the Elderly’s annual Christmas dinner in Dublin yesterday.

And the crowd of 75 diners couldn’t have been more receptive; shouting back lyrics, dancing in their chairs and waving arms and tumblers of Baileys in the air.

All the while a team of volunteers scuttled about with plates laden with roast turkey and mashed potatoes.

The Friends of the Elderly was first established in Ireland in 1980 and has grown steadily over the years.

Rose Carney (91), from Phibsborough Road, Dublin, has been a member for 25 years.

VIDEO: ‘I’m so happy, sure aren’t we out for the day?!’ – Friends of the Elderly hosts Christmas dinner
Video by: Jason Kennedy

“When I was married my husband used to bring me out the whole time and buy me boxes of Milk Tray.

“So I hadn’t heard of this club or any other ones.”

When Ms Carney joined she discovered a new support network.

“We are all one gang, we all team up together here,” she said. “It’s a real girls’ club today.”

Yesterday’s dinner was the first of three festive sittings due to be held at the Bolton Street headquarters.

Maureen Donegan (75), from Dorset Street, Dublin, has been visiting the centre for 10 years.

“It’s nice to meet people and be friendly to people. Some of the people who come here don’t have anywhere else so it’s lovely to have this place to socialise.”

Friends of the Elderly receives no government funding and depends entirely on fundraising appeals.

Chairman Jim O’Brien says the organisation is equally dependent on generosity of spirit.

“We want people to bring flowers before bread – in other words bring love first,” he said. “I know that sounds corny, but that’s what develops between the visiting volunteers and the members – love.”

Friends of the Elderly is a member of the International Federation of the Little Brothers of the Poor, founded in Paris in 1946.

To make a donation visit www.friendsoftheelderly.ie.